Using just perennials can achieve a bio diverse border for wildlife at their peak of activity. These cottage style combinations of varying heights can offer a much needed source for pollinating insects. You may, however, want to interspace some staple shrubs otherwise in the dormant period it will appear a redundant bed. Evergreens like Euonymous, Hebe (most are hardy) Mahonia, Spotted Laurel and Cornus are all hardy and will provide interest all year round.

These perennials aren’t necessarily meant to go together, it may create a collision of colour. Some are red, some yellow, purple and blue but they assist in providing a sample of what’s available.

Monarda (Red / Purple / White – Bee balm or Bergamot) M. diddyma, the red one is most common although there are pink varieties like ‘Pink lace’. It is in fact the leaves that are scented but they provide attractive flowers in late summer. A plant not great in dry conditions so the soil needs to be moisture retentive. It’s a hardy perennial, in the dormant period its underground in any case but no further cover needed..

Agastache hyssop (Anise) offers aromatic leaves and useful flora as a food source. It flowers in mid summer and available in whites and purples. Anise does need full sun and well drained soil. A. ‘Blue fortune’ – purple, A. ‘Alabaster’ – white. The plant is not fond of an exposed site so a sheltered spot is preferred. Also, as it lays dormant it may need additional protection so mulch added to its crown. Having said this, once in situ almost no maintenance.

Rudbeckia aka “Black-eyed Susan” is a late summer / early autumn perennial that offers a plethora of colour right up until mid November at times. The height of these differ between cultivars so be mindful not to overshadow a neighbouring plant. R. fulgida var. Sullivantii ‘Goldstrum’ is knee high say wheras R. hirta dwarf ‘Toto’ is much smaller with large flower heads. They are not drought tolerant either so ensure soil is not sandy. It likes a humus rich medium,  it does needs sun but benefits from some shade after its had its light.

Penstemons flower in early summer and offer much needed nectar. It can be incorporated near or in rockeries. The perennial can tolerate poor conditions and dry spells. There are pinks, whites, purples and reds. Their lifespan is not indefinite, they will come back from the crown each year but periodically need replacing, They do have a tendency to become woody so do prune quite harshly back. It’s good practice to propagate the seeds from the parent plant to keep the vigorous growth.

Echinacea pupurea (a coneflower), the most common prefers a fertile environment so not a survivor of poor conditions. It prefers a more sunny aspect so although it needs moisture, it will not tolerate sitting in water. It prefers a drier medium but not extreme either. It will flower early to late summer, usually pink but can be orange. E. ‘Kismet intense orange’ or ‘Orange passion’.

Echinops are often overlooked where size is an issue since they become rather imposing. These too attract hoverflies and butterflies. The soil is not too important, since they are fairly resilient. The plant will cope in most conditions and flowers in late summer.

Hollyhocks offer a food source for a number of beneficial insects and are relatively easy to grow. Simply by their height they need to be staked but otherwise generally straightforward. Hollyhocks do need sun and will not tolerate shade. A sunny border is ideal but sometimes grow where you would least expect them. Cut to the base after flowering. When they are young they need some protection from slugs and alike.

Delphiniums (Larkspur) are one of the 1st perennials to emerge and seemingly frost tolerant. It flowers in summer but for a perennial a little short lived. Like Hollyhocks, the length of the stem may warrant staking as if exposed will be damaged with strong winds. A good medium is needed and a sunny aspect. 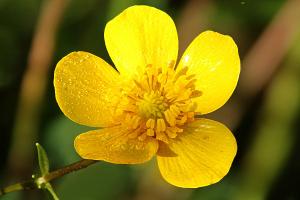